Angelo Bernardo Jr. is the grandson of Constancio Bernardo 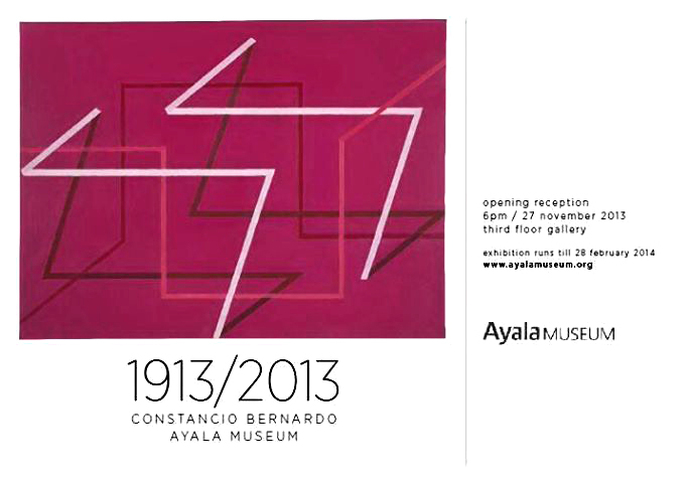 The story goes that when the noted abstractionist Josef Albers met Constancio Bernardo at Yale, where the young Filipino had gone to study on a Fulbright grant, he hailed the Filipino “not as a student, but as a peer.” Albers went on to predict that Bernardo — who completed both a second bachelor’s and an MFA degree at Yale — would become a resounding success upon his return to the Philippines in the early 1950s, given his abounding talent.

Indeed, Bernardo had left for the US with high hopes and with his mentor Fernando Amorsolo’s blessings; Amorsolo had reportedly singled out Bernardo as the student most likely to surpass him, especially since Constancio was then working in the same traditional figurative style of which Amorsolo was the acknowledged master.

Sadly and surprisingly, Albers’ rosy prediction would fail to materialize. Bernardo did come home after his Fulbright, but instead of being welcomed warmly by Amorsolo et al, Bernardo — now an accomplished and committed abstractionist — was shunned. He would continue to serve UP, teaching in the School (and later College) of Fine Arts as a teacher and administrator, and his body of work would continue to, establishing him firmly — in the words of art critic Leonidas Benesa — as “second to none in this country” in the field of abstraction, “particularly of the geometric-planar, optical-painting variety.”

(As it happened, I was UP’s vice president for Public Affairs at the time, and attended Bernardo’s wake in my official capacity. Despite my own abiding interest in the visual arts, it was my first albeit belated encounter with Bernardo and his work, leading eventually to an invitation from the family for me to sit on the board of the Constancio Ma. A. Bernardo Foundation, which I accepted.)

It’s high time, then, that Filipinos rediscover and appreciate this lost master in their midst, a need that will be addressed starting this Wednesday the 27th, when a comprehensive retrospective exhibition of Constancio Bernardo’s work opens at the Ayala Museum in Makati. Including about a hundred representative works, the retrospective also coincides with the centenary of Bernardo’s birth, and will be on view until February 28th next year.

According to the exhibition notes penned by the art critic Carina Evangelista, “the exhibition provides the first opportunity to view the full range of Bernardo’s oeuvre from a career span of more than 60 years and highlights his canvases of abstraction, lauded by a number of critics from the 1950s onward as among the most important examples of Philippine modernist painting but increasingly overlooked as the decades passed. While included in a number of group exhibitions and the subject of 22 solo exhibitions including retrospectives at UP Baguio in 1969, at the Museum of Philippine Art in 1978, and at the Cultural Center of the Philippines in 1990, Bernardo remains to be on the margins of the annals of Philippine art history. Dedicated to his lifelong art practice and his teaching career at the University of the Philippines, Bernardo staunchly resisted the limelight, eschewing the social scene of the art world and opting to work tirelessly in his studio. 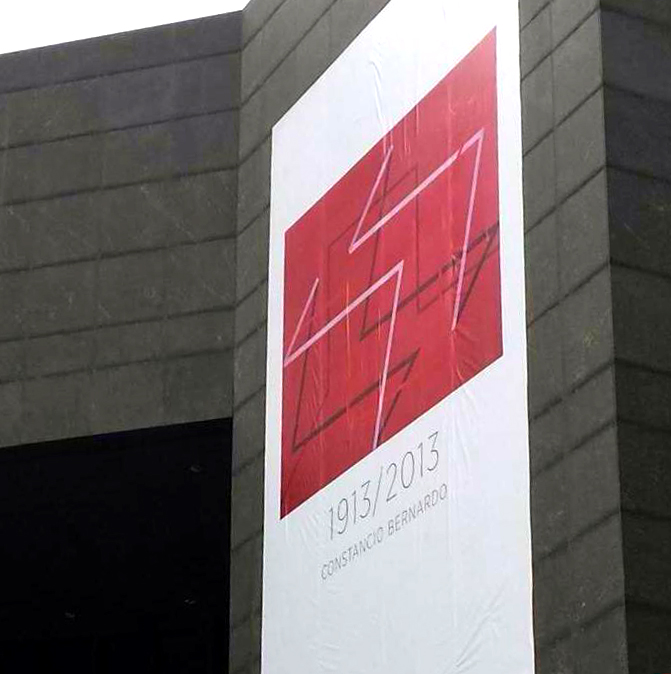 Within abstraction, his paintings ranged from geometric abstraction to Op art and abstract expressionism — each series structured with a formal mastery and infused with a depth of feeling singularly his. Obdurate in his self-effacing silence in his lifetime, his body of work preserved by the Museo Bernardo Foundation Inc., and CMa Bernardo Foundation for Fine Arts, proves to be the clearest evidence of enduring artistic expression.”

To writer Francine Medina, “Constancio Ma. Bernardo has an indispensable place in Philippine art history. A prolific artist, he painted every day till his last breath, producing an impressive range of works from self-portraits that chronicled his quiet yet intense life; uncannily realistic still life paintings and nudes; to his highly praised fields of color in his ‘Perpetual Motion’ series. It was just that art was a necessary almost organic function that he needed to accomplish everyday.

“There was a palpable sense of completeness in the way he approached his works, a proof of his great involvement in each piece. He mixed his own paints, diligently worked in his studio, and made his handiwork complete by creating the frames for his art works.

“His quest for the ultimate painting was such that when he felt a work was not at par with his self-subscribed standards, he would paint over it or, as his closest peers would attest, throw it away, never to be seen or worked on again.”

It’s too bad that I never got to know the man when he was alive. I’ve made friends of many artists, and while they generally and understandably aren’t as voluble or as articulate as my writer-friends, many have led very interesting lives that deserve to be known and written about, quite apart from their creations. My wife Beng was a Fine Arts student at UP when Bernardo taught there, but being a Visual Communication major, she never got to study with him, unlike her contemporary, the former Fine Arts dean and modernist Nestor Vinluan, whose paintings clearly show Bernardo’s influence. She remembers him, however, as a quiet and kindly man, with a rather formal demeanor, someone who spoke only when he had to and who chose his words well.

In this restrospective exhibit, Constancio Bernardo’s works will speak for themselves, and hopefully lift him and his legacy out of the obscurity they don’t deserve.

Let me acknowledge and thank Constancio’s son, the retired anthropologist Angelo Bernardo, for providing additional source material on the painter.